Greetings and Welcome to the July issue of Pianotes!

I hope everyone’s summer is off to a great start! I have lots of news and photos for you this month, so let’s get right to it!

The first concert in Paris where admission was charged was on March 18, 1725. The early concerts were sacred music only and were required to be held on church holy days. Lyrics had to be sung in Latin. These concerts were called "Concert spirituel.”

As a boy, Harry Truman arose at 5:00 AM to practice the piano. Ignace Paderewski, Premier of Poland as well as one of the greatest concert pianists ever, once gave Truman a piano lesson.
New Reviews: There is an interesting variety of new reviews this month including albums by Peter Calandra, Reis Taylor Dixon, Jim Ottaway, Rachel LaFond, and several others, as well as singles by Greg Maroney and Jesse Brown. You can see all of the new reviews from the past ninety days or so here:
The world’s most expensive piano was sold to an anonymous bidder for $3.22 million in an auction. The Heintzman Crystal Piano was crafted by Canadian piano manufacturer Heintzman Pianos. Built exclusively for really big public performances, this piano was introduced to the public when Chinese pianist Lang Lang played it to a global audience of almost a billion people during the opening ceremony of the Beijing Olympic Games in 2008. To see a photo, click here.

Here is a link to the ten most expensive pianos in the world:

One of Beethoven's landlords in Baden was glad to have the composer as a tenant. When Beethoven moved out, the landlord auctioned off the window shutters, which were covered with musical notation.

Neil Patton at FEC: Due to a family emergency, Neil Patton had to cancel his house concert here on June 2nd, but he will be appearing with Dance Veritas at the Florence (Oregon) Events Center on August 4th! The first half of the concert will be Neil performing solo piano mainly from his newest release, Solitaire. The second half of the concert will be Neil playing solo piano and the Eugene modern dance company, Dance Veritas, dancing to his music. Tickets are $20 for adults and $15 for students and are available at the box office or online. Mom and I will be in the front row!!! 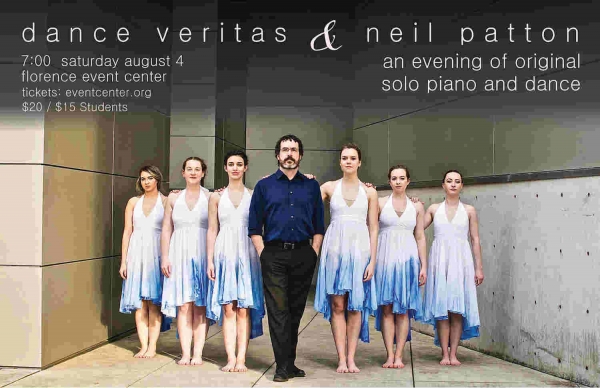 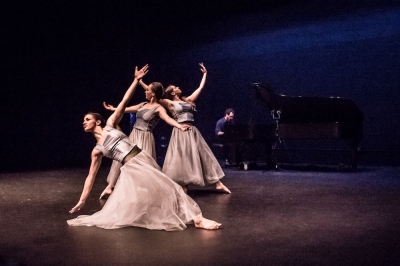 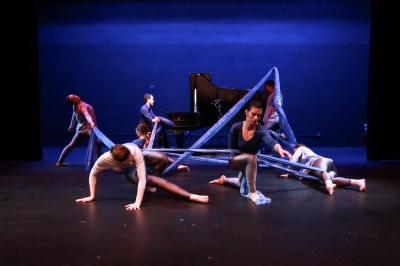 Mikhail Glinka (1804-1857) is considered to be the father of Russian music. He decided to establish a truly Russian style of music.

Peter Ilyich Tchaikovsky was always a sensitive little boy. The slightest scolding from his nanny would send him into a long sulk. She called him a "porcelain child.”

The Boston police once wanted to fine Igor Stravinsky for writing an arrangement of "The Star Spangled Banner.”

July and August House Concerts: There are some great house concerts coming up:

July 16th: Pianist/composers Joseph Akins and Rachel LaFond will be performing here. Joseph has played here many times and is one of my favorites. He’s a professor of music industry at Middle Tennessee University in Tennessee. He has released seven albums to date, and recently re-released his debut album from 1997. I’ll be reviewing that one soon. Joseph also occasionally posts reviews here on MainlyPiano.com. Rachel LaFond is the daughter of a prominent piano teacher in Washington state and has music running through her veins. She and her husband have settled in New Zealand and Rachel recently released her second solo piano album, Encounters of the Beautiful Kind. All of the info is here.

August 3rd: Pianist/composer Milo Graamans will be returning for his second concert here. Milo lives in Newport, OR and has written musicals in addition to his piano music.

August 29th: I’m really excited to welcome pianist/composer Jim Chappell to Florence for his first concert here. Jim was one of the artists who helped to establish the new age/smooth jazz genres and has released at least twenty-two albums over the years. This will be a very special concert!
For one of his recitals, Arnold Schoenberg (1874-1951) had a card printed up telling the audience that the purchase of a ticket entitled them to sit quietly and listen, but not to express their opinion of the music.

While he was in college, Robert Schumann had a vision that was sadly prophetic: "The moon was shining on the water. I fell asleep and dreamt that I had drowned in the Rhine." Several years later, he went out for an evening walk, and unsuccessfully tried to drown himself in that same river.

When pianist/comedian Victor Borge arrived in the United States in 1940, he was so broke that he applied for a job as a gas station attendant. He was turned down because his English wasn’t good enough.
Student Recital: On July 15th, I’ll have my summer recital with my seven students. Since the group is small, each student will play three pieces, so it should be fun. I’m really happy that my more advanced students will be including some ragtime, a style I am passionate about! I’ll have some photos for the next issue!
Frederic Chopin’s body was buried in a cemetery in Paris, but his heart is buried in Warsaw, Poland. (This was done at Chopin’s request before he died.)

Mozart wrote his first opera when he was 12. When he was 11, The Archbishop of Salzburg commissioned Mozart to write an oratorio (a religious musical production that is performed without costumes or props). Suspicious that the boy would seek outside help, the Archbishop locked Mozart in a stuffy little room for a week until the work was finished.

When a musicians’ strike threatened to cancel a performance of Verdi’s opera “La Traviata” in Rome, Italy, in June 1995, the maestro announced that he would play the score himself on the piano. Conductor Riccardo Muti conducted from the keyboard, and the singers performed the arias and ensemble pieces. The audience, in turn, gave the performers wild ovations.

John Nilsen’s Concert Here: On June 23rd, pianist/composer/singer/guitarist John Nilsen made his third appearance here in concert, but it was his first in several years. John is a dynamic and extremely versatile artist and he earned an enthusiastic standing ovation. John promises to return next year, too! Here are some photos from that concert: 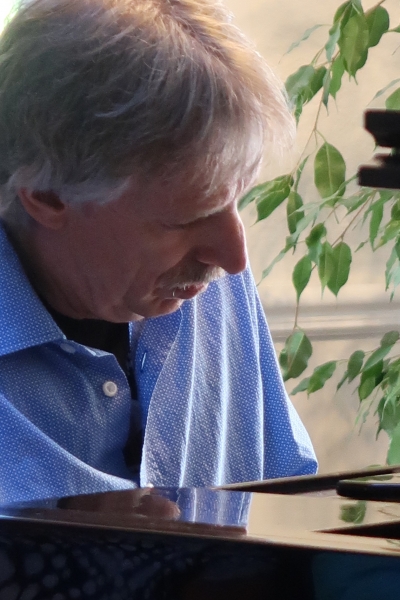 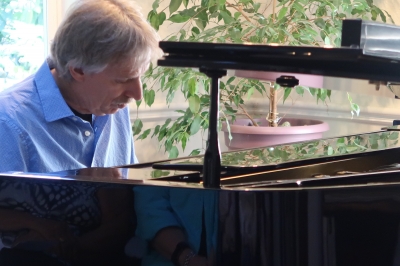 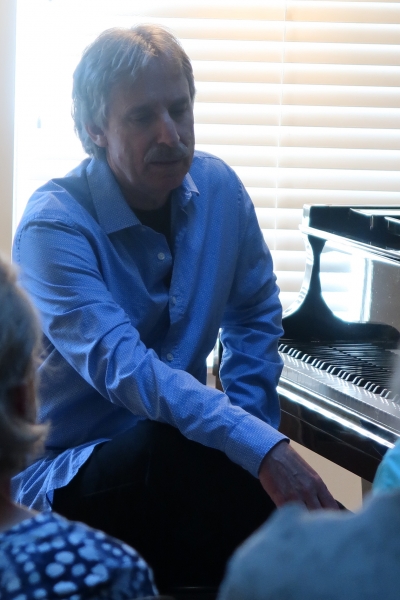 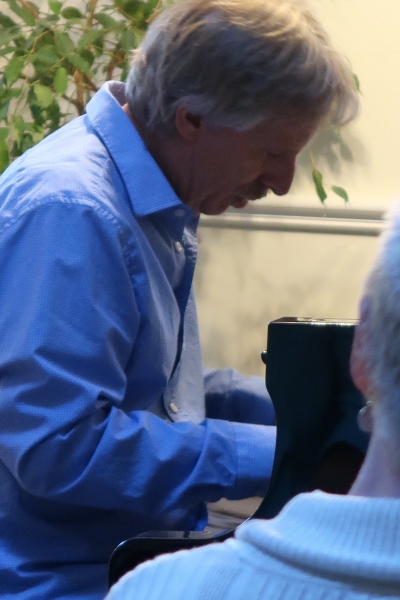 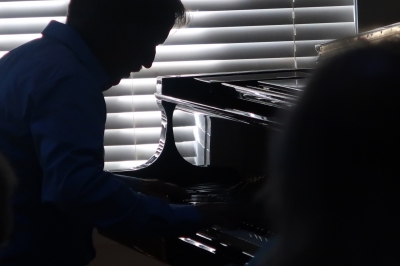 Johann Strauss was “The Waltz King of Vienna” - so was his father, whose name was also Johann Strauss. They had a very bitter rivalry, but the son ended up being the more famous of the two.

In 1913, the audience at the premiere of Igor Stravinksy’s “Rite of Spring” was outraged by what they thought was a musical joke. Heckling and fistfights broke out. Today, the piece is considered a classic that ushered in 20th century music.

July Birthdays: Here is this month’s list of musical birthdays:

Happy Birthday to all of you!
Before he died in 1941, Polish prime minister and composer/pianist Ignacy Paderewski asked to be buried in the US until Poland became a free country. He was buried in Arlington National Cemetery for 51 years. In June 1992, Paderewski’s body was returned to Poland - except for his heart, which, at his request, remains in the US inside a bronze monument at the Our Lady of Czestochowa shrine in Doylestown, PA.

Scientists examined eight strands of Ludwig van Beethoven’s hair, and found lead at more than 100 times the normal measure. Lead poisoning could explain his constant abdominal distress, irritability, and depression, and may have led to his death. A book has been published called Beethoven's Hair which describes the findings from this lock of hair.

The highest achiever among the famous composers was Franz Joseph Haydn, who wrote 340 hours of music in 54 years. If you started listening to his collected works for eight hours a day, you’d be done in just over six weeks.

Closing Photos: I usually post some of my own photos at the end of each issue, but Tim Neumark recently spent a month in Europe and sent some of his photos of the Dvorak Museum in Prague to share. Thanks, Tim!!!
The lowest achiever among the famous composers was Maurice Ravel, who wrote only 19 hours of music in 42 years. That’s a career average of about 30 seconds of musical output a week.

Mildred and Patty Hill published a song in 1893 that was named "Good Morning to You." It wasn't very popular, so they changed it a little bit and renamed it "Happy Birthday." It is the song we sing for everyone's birthday!
I think that covers it for this month’s issue! Have a safe and happy 4th of July and enjoy the summer months! 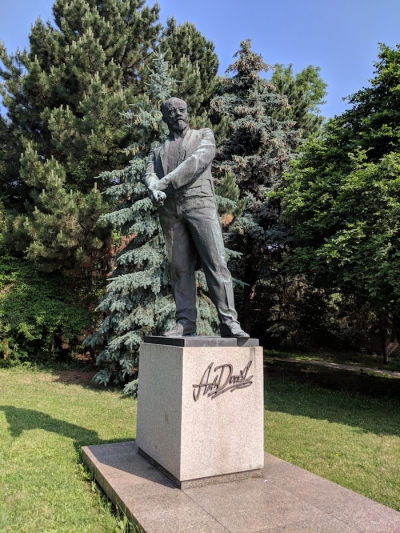 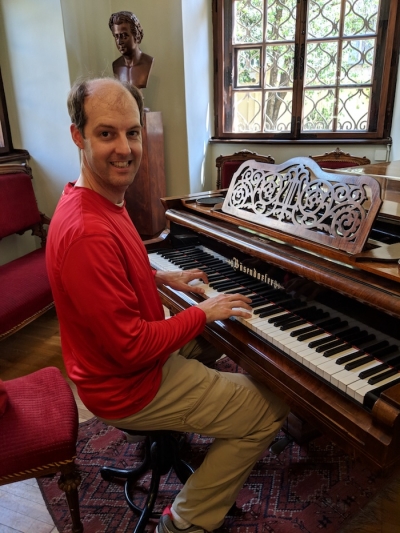 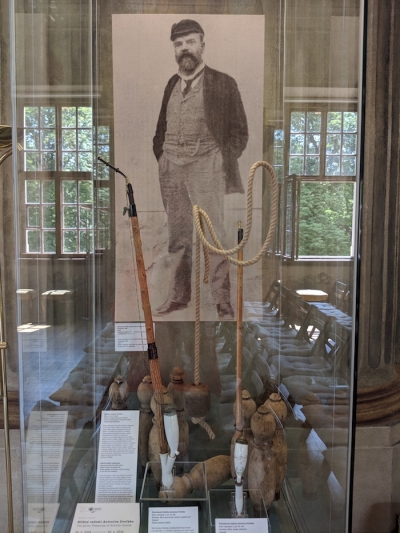 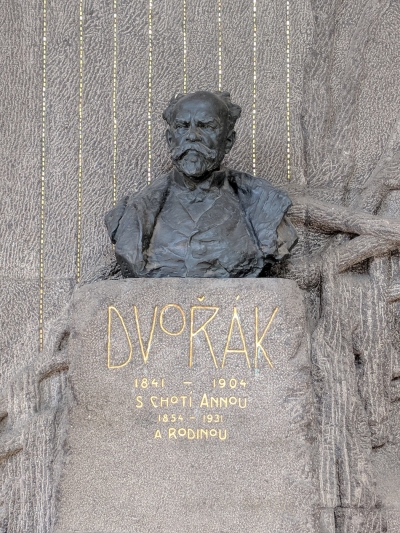 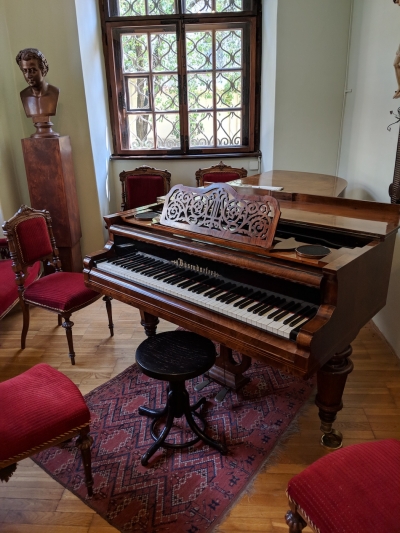 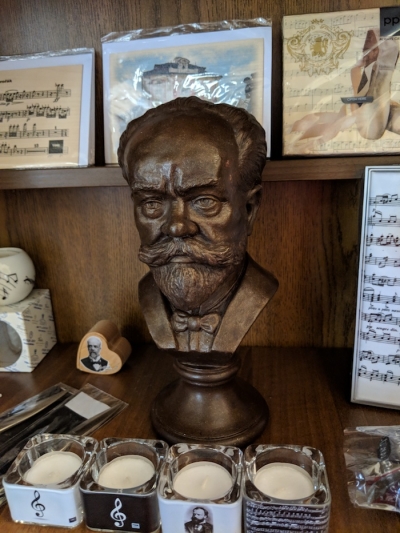 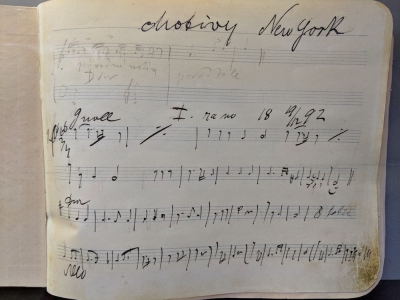