Kathryn's Website Kathryn's Artist Page on MainlyPiano
Album Links
Amazon (referral)iTunes
This site contains affiliate links to products. We may receive a commission for purchases made through these links.
What the Winter Said
Kathryn Kaye
2013 / Overland Mountain Music
62 minutes
Review by Michael Debbage
Kathryn Kaye released her impressive debut solo album Dreaming Still less than three years ago. With the Will Ackerman A-team assisting there was no doubting that this southeastern Kentucky pianist’s plan was to make a significant splash with her arrival and that she certainly did. And if her solo debut could be described as a splash then her gorgeous Heavy as A Feather featuring more embellishments was a swell of a time. What The Winter Said combines her more stripped down performances of her debut and merges them with perfection with embellished songs that were prominent on her second album. As a result What The Winter Said will allow your ears to be gently submitted into a sweet surrender of serenity.

While the album title and the credits would suggest a Christmas influence, and there certainly is that, Kaye’s latest creation is dedicated more to the season of winter and all the magic it brings. This is largely due to the fact that the few carols Kaye has chosen are less familiar to the general listening public. The album also includes a cover of Ackerman’s composition “The Bricklayer’s Beautiful Daughter” and when added with her own enthralling but restrained creations the results are simply astonishing.

The majority of the album features embellished tracks with four duets and only three of the fifteen being solo performances. So starting with the sparse song “A Rose In Winter” is a bold but restrained way to begin What The Winter Said. Otherwise, Kaye’s calm compositions have just enough melody to prevent them from being overbearing yet never falling into a sad lamentation. Probably her most melodic performance can be found on “The Arrival” that has Kathryn’s piano work caressing with Jill Haley’s English horn only to be followed up by the almost weeping “Carol Of The Birds”.

What The Winter Said closes out the album with the uncomplicated “Cumberland Mountain Hymn” bringing to a conclusion yet another restrained but never restrictive performance from Kathryn Kaye. Clearly the creativity that is currently flowing out of the fingertips of Kaye show no signs of slowing down with a winter themed album that can and should be played all year long.
March 1, 2014
This review has been tagged as:
Holiday AlbumsMichael's Favorites: 2013ZMR Winner
Kathryn's Website Kathryn's Artist Page on MainlyPiano
Album Links
Amazon (referral)iTunes
This site contains affiliate links to products. We may receive a commission for purchases made through these links.
More reviews of Kathryn Kaye albums 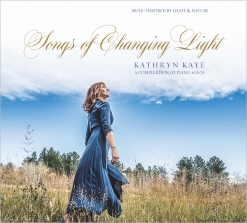