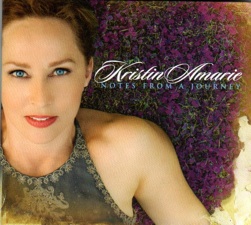 Kristin's Website Kristin's Artist Page on MainlyPiano
Album Links
Amazon (referral)iTunes
This site contains affiliate links to products. We may receive a commission for purchases made through these links.
Notes From a Journey
Kristin Amarie
2013 / Kristin Amarie
41 minutes
Review by Kathy Parsons
Notes From a Journey is the debut solo album from singer/songwriter Kristin Amarie. Truly a “global citizen” who was born and raised in Norway, spent her late teens on the island of Cyprus and half of her adult life in New Delhi, Kristin Amarie also spent time working and studying in London, Bangkok, Malta, and France; she now calls New York home. She has performed with various groups singing everything from Scandinavian folk songs to bossa nova in Europe, Asia, and the US. All of these cultural influences can be heard in her music, and her clear, beautiful voice expresses a broad range of emotions. The album was produced by Grammy-nominated producer Alex Salzman and features an appearance by pianist David Lanz, who collaborated with Kristin Amarie on two of the songs. The richly orchestrated music also includes appearances by Alex Salzman on keyboards, guitars, and programming; Tony Aiello on flute and soprano sax; and Joe Deninzon on violin. Notes From a Journey is a very impressive debut, and much of the music would easily crossover from world to new age and pop categories.

The album begins with “First Light,” a song about the beauty that surrounds us as well as the magical circle of life and new beginnings. This wordless vocal will undoubtedly invite comparison to Enya, but Kristin Amarie’s soaring singing style is very much her own. The symphonic production in this piece would be wonderful in a film soundtrack! “Amore Eterno” (“Eternal Love”) is a gorgeous love song sung in Italian and English and very lushly orchestrated. The lyrics to “Prayers” come from Psalm 38 in The Old Testament. With strong Middle Eastern influences, the music is haunting and somewhat mysterious. David Lanz contributed the lyrics to “Beloved (And I’ll Dream in Blue),” an intense love song that conveys the pain of separation as well as hope for the future. Definitely a favorite! “Winter in Shimla” is exotic, rhythmic, and upbeat. “Without You,” another soaring love song, was co-written with Lanz and features him on piano - also a favorite. “Fra Beatrice” was inspired by Dante Alighieri, the 13th century Italian writer, who met Beatrice when he was nine years old, the only woman he ever truly loved. Because he had been promised in marriage to someone else, a relationship with Beatrice was impossible, but they kept their love for one another throughout their lives. The lyrics are sung in English and Norwegian, and the title translates to “From Beatrice.” “Sulla meg litt” brings the album to a close with a sweet traditional Norwegian lullaby.

Although this is not the beginning of Kristin Amarie’s singing career, Notes From a Journey is a very promising start to her solo career. This album is available from amariemusic.com, Amazon, iTunes and CD Baby. Recommended!
September 29, 2013
This review has been tagged as:
Debut Albums
Kristin's Website Kristin's Artist Page on MainlyPiano
Album Links
Amazon (referral)iTunes
This site contains affiliate links to products. We may receive a commission for purchases made through these links.
More reviews of Kristin Amarie albums 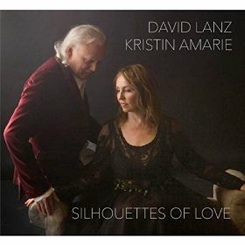 Silhouettes of Love
with David Lanz
2015 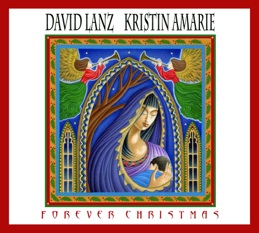