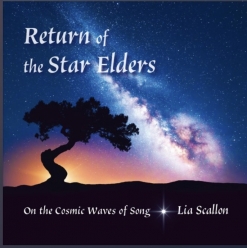 Lia's Website Lia's Artist Page on MainlyPiano
Album Links
SoundcloudAboriginal ProphecyTo Buy CD or MP3Amazon (referral)
This site contains affiliate links to products. We may receive a commission for purchases made through these links.
Return of the Star Elders
Lia Scallon
2021 / Sounds of Sirius
78 minutes
Review by Kathy Parsons
Return of the Star Elders is the thirteenth album in Lia Scallon's multiple award-winning "Sounds of Sirius" series. The music was composed by Scallon and is sung in her own healing "Light Language," which she channels. The music tells a tale of hope and redemption for humankind while taking us on a journey to places and cultures that are earthly and some that are not. Supported by a team of outstanding musicians that includes Nigel Pegrum (flute, keyboards, percussion/ambient sounds), David Hudson (didgeridoo, Aboriginal vocals), Kirk Steel (keyboards), Simon McMenamin (viola, violin), Nereace (keyboards) and Ben Hakalitz (drums), the music creates a bridge between a world in crisis and the Guardians of the ancient Stargates that exist between the worlds. Lia Scallon explains:

"The Prophecy speaks of a Pleiadean spaceship that came to Earth a long time ago, leaving behind a special device to be activated at a predestined time. The Aboriginal Elders refer to this device as a “Magic Box” and say it is beyond the comprehension of mere mortals.

"This long-awaited activation is said to occur at Uluru at 9.02pm, Northern Territory time, on December 21st Solstice, at the exact moment of the Great Conjunction of Jupiter and Saturn.

"I believe Return of the Star Elders has been orchestrated by the Star Elders. The music and Light Language messages contain Codes of Light, to prepare us for the massive  influx of Cosmic frequencies on December 21st, and to support us in the subsequent adjustment to those frequencies."

Quoting the liner notes of the CD, "As the Light Codes ignite, each human soul is released from bondage. Sovereign and Free, humanity returns to its original state; Unity, Peace and connection to Source anchored once more, in the deep recesses of their soul. This is the time our ancestors foretold….the Return to Lemuria."

For a full explanation of the prophecy and what occurred on 12/21/20, see the link to the left of this review.

The nine tracks on Return of the Star Elders are haunting and represent musical traditions from all over the world. None of the lyrics are in English, but Scallon's voice, whether singing, chanting or speaking, is hypnotic and communicates very deeply even without a common language - or maybe because of it! The album tells an extraordinary story and overflows with hope and enlightenment - something this world desperately needs these days.

Return of the Star Elders is available from Lia Scallon's website and Amazon, and can be streamed on Lia's site or on SoundCloud.

February 14, 2021
This review has been tagged as:
Latest Reviews
Lia's Website Lia's Artist Page on MainlyPiano
Album Links
SoundcloudAboriginal ProphecyTo Buy CD or MP3Amazon (referral)
This site contains affiliate links to products. We may receive a commission for purchases made through these links.
More reviews of Lia Scallon albums 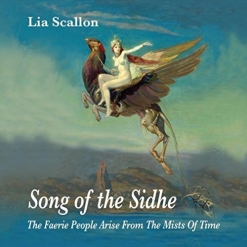 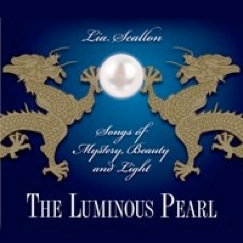 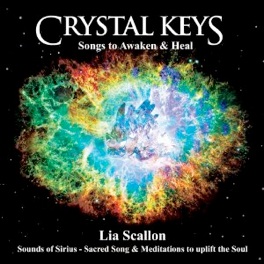